The Vadoma people, also known as the Bantwana tribe, which means children/descendants, are a tribe living in the north of Zimbabwe, primarily in the Urungwe and Sipolilo districts on the Zambezi river valley.

There are many in their community, who can’t wear shoes due to the shape of their feet. They only have two big toes on each foot.

They don’t have middle toes and the two outer ones are turned in. They still can walk but with some difficulty according to the shape, running is also difficult to them. It is said this condition helps them while climbing trees, though. The elders of the Vadoma people claim that their remote ancestors were bird like beings who came from the stars and mixed their DNA with early earth women to produce offspring. The elders state that their ancient ancestors came from the star systems of Sirius and first established colonies on a planet within our solar system that they refer to as Liitolafisi. 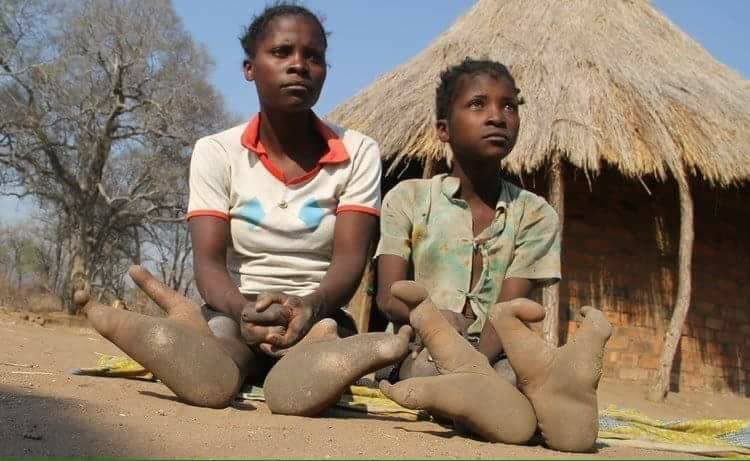 A substantial minority of vaDoma has a condition known as ectrodactyly in which the middle three toes are absent and the two outer ones are turned in, resulting in the tribe being known as the “two-toed” or “ostrich-footed” tribe. This is an autosomal dominant condition resulting from a single mutation on chromosome number 7. It is reported that those with the condition are not handicapped and well-integrated into the tribe. While possibly an aid in tree climbing, the condition prevails because of a small genetic pool among the vaDoma and is propagated by the tribal law that forbids members to marry outside the group.

Due to the vaDoma tribe’s isolation, they have developed and maintained ectrodactyly, and their comparatively small gene pool has resulted in the condition being much more frequent than elsewhere. The Eastern Shona Kalanga of the Kalahari Desert also have a number of members with ectrodactyly and may be related.